by admin
in News

For more than 15 months, the CDC fought to not release any of these data. ICAN had to file two lawsuits and multiple appeals to get the CDC to hand it over, and when you see the data, you understand why.

By now, many know about the existence of the Vaccine Adverse Events Reporting System (VAERS), a publicly available database for vaccine adverse event reports, jointly managed by the CDC and the U.S. Food and Drug Administration.

V-Safe1 is another database managed and monitored by the CDC. It’s a voluntary “after vaccination health checker” deployed to collect data on those who got the COVID jab.

Anyone in the United States can enroll in V-Safe, using their smartphone, after receiving any dose of COVID-19 vaccine. Parents can also enroll their underage children to keep tabs on health effects. During the first week after each dose, V-Safe will send you a daily text message asking for details on your health and well-being. After that, check-ins are sent out on an intermittent basis.

What Does V-Safe Show?

So, what does the V-Safe data, which the CDC was so reluctant to release, actually show? Are the COVID jabs as harmless as they’re claimed to be? Far from it.

As detailed by Siri, out of the 10 million people enrolled in V-Safe, 7.7% (770,000 people) required medical care after getting the shot and 25% (2.5 million people) missed work or school or suffered a serious side effect that affected their day-to-day life.

As noted by Siri, these numbers are extraordinary. One of the key messages we were given was that while COVID was not a significant threat to all people, getting the shot would limit the number of hospitalizations, deaths and days missed from work due to infection.

Well, we now see that 25% of those who got the shot ended up missing work or school because of the side effects, and 7.7% needed medical care. That’s staggering, and completely nullifies the CDC’s argument that everyone should get the shot, whether they’re in a high-risk category or not, and whether they’ve already had COVID-19 or not.

The V-Safe data also show a massive signal with regard to the jab causing an adverse immune reaction. Four million people, out of the 10 million — 40% — reported joint pain. Two million, or 20%, reported “moderate” joint pain and 400,000, or 4%, classified the pain as “severe.”

As noted by Siri, joint pain is often a sign of an immune reaction and could be cause for concern when it occurs after vaccination, especially when you consider that the shots were supposed to protect the elderly, who already tend to have joint problems. 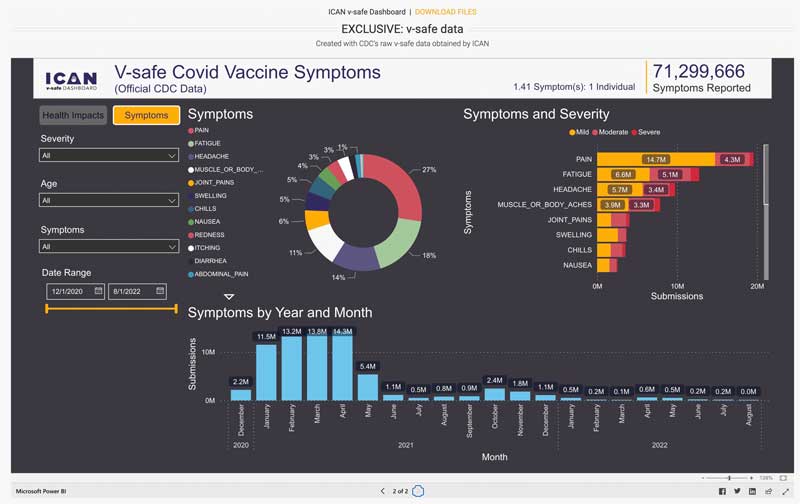 The V-Safe database also reveals that even though fewer doses of Moderna were registered, it’s mRNA shot accounts for a larger portion of negative effects, compared to Pfizer’s jab.

ICAN has now built a searchable dashboard of this V-Safe data.2 In the video below, Albert Benavides (who goes by the name Welcome the Eagle 88), an RCM expert, data analyst and auditor, provides a tour and overview of how to use the dashboard, including some of its strengths and weaknesses.

Why Did the CDC Fight to Keep V-Safe Data Hidden?

In an October 5, 2022, Substack article, Steve Kirsch commented on the V-Safe data dump:3

“V-Safe is a voluntary safety monitoring program put in place by the CDC to monitor adverse reactions after people take a vaccine. The V-Safe data shows that 33.1% of the people who got the vaccine suffered from a significant adverse event and 7.7% had to seek professional medical care.

As noted by Kirsch, side effects could be either under- or overestimated in V-Safe, or both, as some might ignore V-Safe requests to answer questions, and others may only sign up or be incentivized to fill out the questionnaire if they suffer a problem.

Additionally, the options for reporting a side effect are predefined and very generic, so people might be experiencing effects that didn’t fit any of the predefined categories of injury. Importantly, death is not reportable to V-Safe, as dead people cannot use their phones. So, we have no way of knowing how many of these 10 million registered V-Safe users have died.

However, “Whether the rates in V-Safe is over-reported or under-reported is a red herring,” Kirsch says. “The issue that should concern everyone is the CDC concealed all the V-Safe data from everyone the entire time.”

In addition to spending taxpayer dollars to prevent the release of this information — which we have every right to — the CDC also stopped promoting use of V-Safe around May 2021, mere months into the COVID jab rollout. As noted by Kirsch, this was probably because “it became crystal clear that it was accumulating data that showed the vaccines were unsafe.”

In an October 3, 2022, article,4 Kirsch also points out that the formula the CDC uses to trigger safety signals — described in its VAERS standard operating procedures manual5 — is “seriously flawed.” Could that be intentional as well?

In July 2021, Matthew Crawford published a three-part series6,7,8 on how the CDC was hiding safety signals. In August 2021, Kirsch also informed the agency of these problems, but was, of course, ignored. Still, “even using their own flawed formula, ‘death’ should have triggered a signal,” he writes. Yet the CDC did not notify the public of what they’d found. Here’s an excerpt from Kirsch article:9

“If you want objective proof of total ineptitude by the CDC and the medical community in monitoring the safety of the COVID vaccines, this is the article you’ve been waiting for. We use their numbers and their own algorithm and show that it should have triggered a safety signal for ‘death.’

The formula the CDC uses for generating safety signals is fundamentally flawed; a ‘bad’ vaccine with lots of adverse events will ‘mask’ large numbers of important safety signals … Let me summarize the key points for you in a nutshell:

A ‘safety signal’ is defined on page 16 in the CDC document as a PRR of at least 2, chi-squared statistic of at least 4, and 3 or more cases of the AE [adverse event] following receipt of the specific vaccine of interest. This is the famous ‘and clause.’ Here it is from the document: 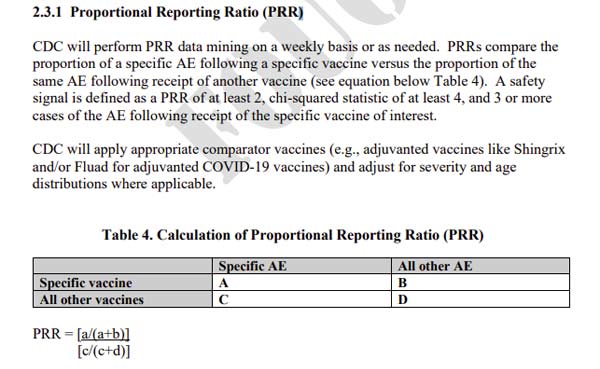 Only someone who is incompetent or is deliberately trying to make the vaccines look safe would use the word ‘and‘ in the definition of a safety signal. Using ‘and’ means that if any one of the conditions isn’t satisfied, no safety signal will be generated. As noted below, the PRR will rarely trigger which virtually guarantees that most events generated by an unsafe vaccine will never get flagged.

Using a fictitious vaccine as the example, Kirsch goes on to explain how an exceptionally dangerous vaccine will fly under the radar and not get flagged, thanks to the CDC’s flawed formula:12

“Suppose we have the world’s most dangerous vaccine that causes adverse events in everyone who gets it and generates 25,000 different adverse events, and each adverse event has 1,000 instances.

That means that the numerator is 1,000/25,000,000 which is just 40 events per million reported events. Now let’s look at actuals for something like deaths. For all other vaccines, there are 6,200 deaths and 1 million adverse events total.

Since 40 per million is less than 6,200 deaths per million, we are not even close to generating a safety signal for deaths from our hypothetical vaccine which killed 1,000 people in a year … The point is that a dangerous vaccine can look very ‘safe’ using the PRR formula.”

Next, Kirsch calculates the PRR (proportional reporting ratio) for death for the COVID jab, using VAERS data and the CDC’s definitions and formula.

Even using the CDC’s flawed formula, ‘death’ meets all three safety signal criteria and should have been flagged, yet the CDC has taken no action. Congress has a duty to investigate the CDC’s failure to monitor safety.

But there is still the chi-square test. Chi-square test results were 18,549 for ‘death,’ which greatly exceeds the required threshold of 4. The CDC chi-square test is clearly satisfied for the COVID vaccine. Because the death signal is so huge, it even survived the PRR test.

This means that even using the CDCs own erroneous … formula, all three criteria were satisfied:

A safety signal should have been generated but wasn’t. Why not? … Does anyone care? Hundreds of thousands of American lives have been lost due to the inability of the CDC to deploy their own flawed safety signal analysis …

It’s been known since at least 2004 that using reporting odds ratio (ROR) is a better estimate of relative risk than PRR.14 I don’t know why the CDC doesn’t use it.”

The CDC is responsible for monitoring both VAERS and V-Safe, and between these two databases, there’s no possible way they could ever say they didn’t know the shots were harming and killing millions of Americans.

The CDC also has access to other databases, including the Defense Medical Epidemiology Database (DMED), which (before it was intentionally altered15) showed massive increases in debilitating and lethal conditions, including a tripling of cancer cases.16

The findings in these databases have never been brought forward during any of the CDC’s Advisory Committee on Immunization Practices (ACIP) meetings or the FDA’s Vaccines and Related Biological Products Advisory Committee (VRBPAC) meetings, at which members have repeatedly voted to authorize the jabs to people of all ages, including infants and pregnant women.

If the CDC was in fact monitoring these databases, as required, there’s simply no way they could have continued to authorize these shots based on the data. Is that why these data were never reviewed? Probably. ACIP and VRBPAC members, for whatever reason, simply didn’t want to know the truth. But the CDC has known all along, and there’s no excuse for not sharing and acting on that data.

The media are ignoring all of this — the V-Safe data and the CDC’s failure to act on a clear safety signal (and the signal being death, of all things!), even when using a formula that was flawed from the start. So, spread the word. Everyone needs to know these facts. It’s not speculation, it’s the CDC’s own data.

The CDC needs to explain why they spent our tax dollars to fight the release of the V-Safe data for 15 months, and why they didn’t halt the shots when a “death” signal was evident. The mainstream press, members of Congress, the medical community and Universities also need to explain why they refuse to investigate these CDC data. To that end, here are a few suggestions for how you can help:

Survey: Digital health investments will rely on ROI and clinical validation in 2023

11 Tips from Top photographers for Kid and Family Photos